By 6 p.m., the airport was teeming with protesters, police, politicians, and families waiting for loved ones to come through U.S. Customs and Border Protection.

To bring a case, Church needed a client

As Susan Church JD ’95 sprinted through a chaotic Logan Airport on January 28, 2017, she realized that history was being made, even if she had no time to ponder its significance. She was too busy playing her part in a legal drama that would turn out to be a transformative moment for the nation.

On that wintery Saturday, Church was among the attorneys challenging an executive order from President Trump that banned entry into the United States by citizens of seven Muslim-majority countries for 90 days, halted all refugee entry for 120 days, and barred Syrian refugees indefinitely. After a frantic effort at Logan to find a client and a gripping, late-night hearing before a federal judge rousted from home, Church and her colleagues won a wide-ranging, if temporary, block on the order. For Church, a trial and appellate attorney focusing mainly on immigration law and criminal defense, the moment was a victory for the American justice system.

“I was trying to remind myself to take stock of this moment because I knew it was historical, and I knew it was probably never going to be repeated in my lifetime,” Church recalls months later.

Gracing the walls of her Cambridge, Massachusetts, law office is a photo of her barreling through Logan past crowds of protesters, her hair askew, power cords trailing from her pockets. The photo has a place of honor near a framed poster celebrating freedom of the press and photos of her husband and law partner, Derege Demissie JD ’97, and their children.

She met Demissie, an immigrant from Ethiopia, at Suffolk Law. He was the one who nudged Church to focus on immigration issues; he asked her to take over his immigration cases when he moved from a law firm to the public defender’s office. “I remember telling him I didn’t want to have anything to do with it,” she says. “I’m a criminal defense attorney—and that’s all I wanted to do.”

But as soon as she started looking into the cases, she was hooked, motivated by the experiences of immigrant clients who fled repressive regimes. Her criminal defense background proved important after the passage of the Illegal Immigration Reform and Immigrant Responsibility Act of 1996, which authorized the deportation of immigrants convicted of even minor offenses.

She speaks of her clients with passion: the Jamaican man with brain injuries so severe that he was twice declared dead and yet was threatened with deportation for shoplifting. The woman who was effectively kept as a slave by a family for 14 years; traumatized, she pled guilty to larceny and could have been deported. The 12-year-old rape victim from Central America who was returned to the land of her attacker, despite Church’s efforts. Church has also seen changes in attitudes about immigrants, including an increase in fear and hostility.

TO BRING THE CASE, SHE NEEDED A CLIENT

Church had braced for something like the travel ban since President Trump’s inauguration but couldn’t bring herself to believe it would affect Massachusetts. But by late on Friday, January 27, it was clear some individuals were being deported or barred from entry. As chair of the New England chapter of the American Immigration Lawyers’ Association, she was fielding frantic calls to “do something.” So on Saturday afternoon, she called an associate from her firm, Heather Yountz, who drove to Church’s house from a protest rally. Since Yountz was dressed too casually for court, Church lent her some clothes—a suit and shoes two sizes too big.

They quickly created fliers with the names and contact information of eight lawyers willing to take cases pro bono, grabbed the only tape they could find—Church’s son’s hockey stick tape—and drove to the airport to distribute the fliers. By 6 p.m., the airport was teeming with protesters, police, politicians, and families waiting for loved ones to come through U.S. Customs and Border Protection.

To bring a case, Church needed a client; through an overheard conversation, she and Yountz managed to discover that people were indeed being held by customs. She found someone who said that her sister and brother-in-law, two University of Massachusetts Dartmouth professors from Iran who had traveled to France for an academic conference, were being detained on their return. Church had a plaintiff. Working with the ACLU, they drafted a complaint. Now, they needed a judge. Church managed to get the cell phone number of U.S. Magistrate Judge Judith G. Dein.

What happened next was surreal. As she punched in the number, Church was thinking: “Am I really going to call a federal judge and demand a hearing right now?” She left a message. At 8 p.m., the judge called back.

“Hi, this is Susan Church.”

“What’s going on?” asked the judge. Church says, “What I think she wanted to say is, ‘Why the heck were you calling me on a Saturday night?’”

Church explained, insisting that a hearing had to happen as soon as possible because people were being detained.

There was a long pause.

“At the federal courthouse.”

Feeling almost foolish, Church blurted out, “Is it going to be open?”

The judge said simply, “I’m going to make it open.”

So, slipping through the crowd, dodging reporters, and nearly getting hit by a car, Church and Yountz, stumbling in her oversize shoes, arrived at the John Joseph Moakley U.S. Courthouse, which indeed had been opened. Dein was joined by U.S. District Court Judge Allison D. Burroughs. Others arrived: a lawyer, from her child’s birthday party; a security guard, from a high school reunion. Ray Farquhar, a lawyer from the U.S. Attorney’s office, came from an engagement party, wearing a sweater vest. Matt Segal, legal director of the ACLU of Massachusetts, arrived. The group needed to file papers to get a case number; Church frantically called her husband at home, and he did the paperwork online. The hearing started around 10 p.m. By early Sunday, the judges had issued a temporary restraining order against the ban and more broadly ordered that the government could not detain or remove individuals who had arrived legally from the countries mentioned in the executive order.

“It was certainly the highlight of my legal career, and it will be hard to match that drama with anything else,” Church recalls. “It was really the first big victory by the courts against this administration and against the discriminatory policies of this administration. It really allowed the courts to step up in a role that they were just born for.”

“If you look at the history of immigration, you will look at a history of pendulum swings, and the pendulum is rarely in the middle,” Church says. She cites the Chinese Exclusion Act of 1882 and President Franklin Roosevelt’s 1942 executive order that detained Japanese-Americans and others in internment camps. She recalls the massive immigration waves through Ellis Island and how President Ronald Reagan approved immigration amnesty in 1986. “And now people are swinging back to the Chinese Exclusion Act days, which is quite sad, because I think our country has clearly been made great by the labor and the contributions of immigrants.”

The Law School nurtured her interest in public affairs and politics, Church says. She was profoundly influenced by the police misconduct course taught by Karen Blum and the Suffolk Defenders Program. She also learned critical lawyering skills in the school’s mock trials and moot courts. “I wouldn’t have been able to do what I did without the criminal training I received at Suffolk,” she says. “I wouldn’t have had the confidence I have as a lawyer without that training.” 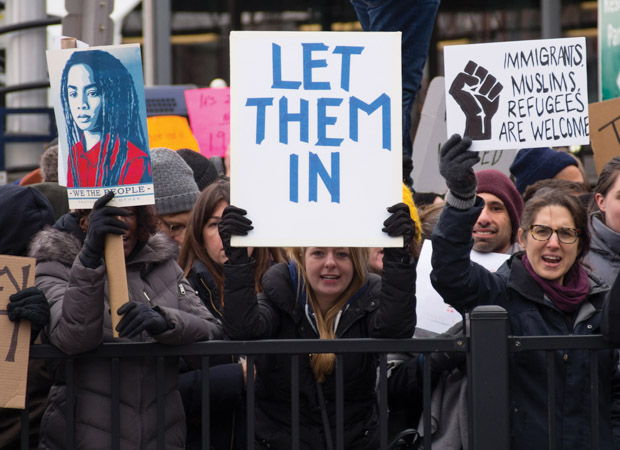 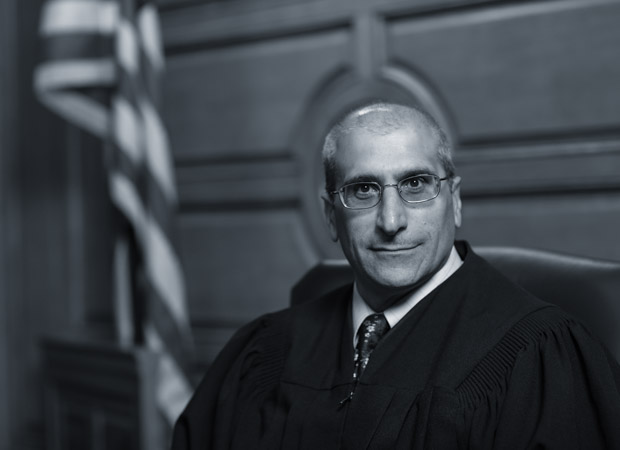 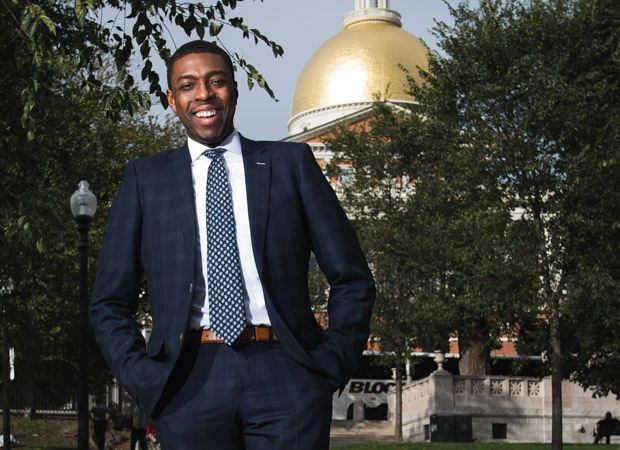 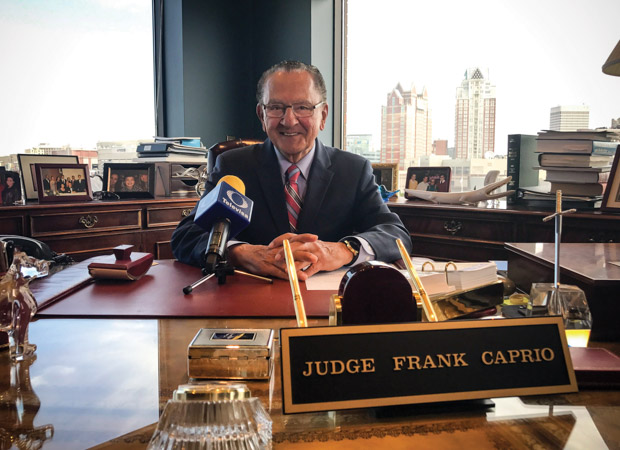