The details of the case were sparse,but they told a story that was all too common in Boston Municipal Court. A pair of officers from the Boston Police Department’s Drug Control Unit had watched a 36-year-old man make a furtive transaction. They noticed him fingering something small and approached the man to ask about it, but the man put the object in his mouth. The officers ordered him to give it up, and when he spit out a baggie of suspected heroin, they arrested him on a single charge of drug possession. After a brief court appearance, the defendant would be released on his own recognizance—leaving prosecutor Angela Cavanaugh JD ’16 to decide what would happen next.

“Unfortunately, his record shows a lot of other charges,” she says, paging through a folder in the West Roxbury Division courthouse office of the assistant district attorney. “He’s picked up charges almost every year.”

Trafficking, intent to distribute, larceny, breaking and entering—the arrests dated back to 2005, and they had led to several stints in jail. The man, Cavanaugh realized, was stealing to pay for an addiction that had haunted him for most of his adult life. The address he had on record was a homeless shelter. Now he was looking at up to two years incarceration. “It’s a relatively upfront case,” Cavanaugh says. “But it’s tough. I can see both sides. This guy clearly has a drug abuse problem, but he’s buying heroin in a place where there are also innocent people.”

As the case wended its way through the courts—with motions to suppress evidence and attempts to elicit plea deals, all perhaps culminating months later in a trial—it would be Cavanaugh’s job to represent the interests of the Commonwealth of Massachusetts. But during her year-long service as a student prosecutor with the Suffolk County district attorney’s office, the third-year Suffolk Law student has learned that justice doesn’t always mean winning trials and locking up criminals.

“I thought, going into school, that it was all about the argument,” Cavanaugh says. But that was before she took advantage of a unique Suffolk Law program that would embed her in the real life of an urban criminal court. “Being a prosecutor is also about compassion, communication, and doing the right thing,” she says. “The only victim in this case is the addict himself. Can I help him, too?”

The possibility of innocence

Over the course of her final year at Suffolk, Cavanaugh has spent Mondays and Wednesdays in court, representing the Commonwealth during arraignments and hearings, reviewing cases, making decisions about when to drop charges or seek pleas, and even arguing a case at trial. (The charge was possession of a dangerous weapon; a judge found the defendant not guilty, but, Cavanaugh says cheerfully, “I got some great feedback from the judge.”)

Cavanaugh is one of two dozen students enrolled in Suffolk’s Prosecutors Program, which since 1975 has provided hundreds of students with courtroom experience—and supplied the Suffolk County District Attorney’s office with nearly half of its 55 current district and Boston Municipal Court assistant district attorneys.

“We’ve got nothing but good things to say about the program’s contribution to our work,” says Suffolk County District Attorney Daniel F. Conley JD ’83. “The students who take part come on the job with better understanding, more experience, and greater confidence in their abilities. In an office like ours, where we try to work as a team, those qualities benefit everyone. From my perspective, there’s no better training ground for a young lawyer than the fast pace of a district or municipal court, and there’s no greater opportunity to serve the interests of justice than as a prosecutor.”

While many law schools offer a prosecution internship, Suffolk’s program is unique not only in its influence on Suffolk County’s criminal courts but also in its hybrid approach. Student prosecutors spend two or more days a week in courts across Boston, with a handful traveling farther away to Middlesex County, Worcester, or even Springfield. But they also gather regularly for classroom sessions with Clinical Professor of Law Diane Juliar to hash out legal and ethical matters that arise in the field.

“Once they get out there, they don’t have much time for reflection, so that’s one of the things we’re trying to do in the classroom,” Juliar says. “The students see assistant district attorneys struggling with, What’s the right thing to do? What’s fair? They are aware of our high incarceration rate and its disparate impact on people of color. But what about public safety? Students learn about the human component and how hard prosecutors struggle not to lose sight of the possibility of innocence, and not to get beaten down by caseloads.”

The professional life of a prosecutor lacks the glamour and tidiness of popular procedurals like Law and Order, and if students begin with that illusion, real-life court experience soon dispels it. But for the most part, romance is not what drives young lawyers to seek careers with the district attorney’s office.

“These students are totally dedicated to public service,” Juliar says. “These jobs are hugely underpaid, but that’s what they want to do.” 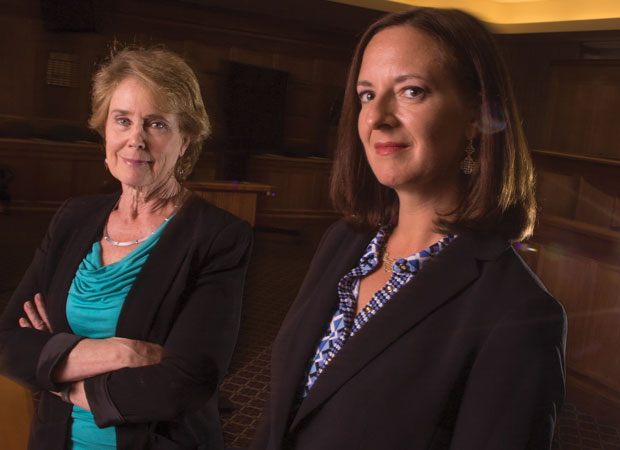 As a teenager, Angela Cavanaugh recalls having a flair for argument. “People always told me I should be a lawyer,” she says, and that was her goal when she enrolled at Assumption College in Worcester. But an unplanned pregnancy just after her junior year derailed her plans.

“It was kind of devastating,” she says. “The thought of law school totally escaped my mind.” She weighed her options and reconsidered her future. She gave birth to a daughter, Alexis, in February 2010. Working twice as hard to balance classwork with caring for a newborn, Cavanaugh graduated on time that May, and within two years she had her own apartment and a full-time marketing job in Boston. She was in love with her daughter and proud of her ability to provide for her. But something was missing.

“The idea of law school kept creeping back in,” she says. “I would shut it down—you don’t hear about single moms going to law school! But on the other hand, I thought, I still have so much life left to live. Do I want to be complacent, or do I want to show my daughter you can be anything you want?”

Her old ambition—and a good LSAT score—eventually won the case. And it turned out that “life experience,” as her district court supervisor, assistant district attorney Megan O’Rourke JD ’05, put it, has made Cavanaugh a better lawyer. “A lot of prosecutors, it’s their first job ever,” O’Rourke says. “They tend to see things in black and white, when it’s actually shades of gray. People who have done something else are more adept at seeing those nuances. And Angela works very hard—you can tell she wants to make this her career.”

If Cavanaugh’s career goes as she hopes, she will follow in the footsteps of Assistant District Attorney Joanne Araujo JD ’12, an alumna of the Prosecutors Program who was recently promoted to a position handling major felony cases in Suffolk County Superior Court. Before that, Araujo spent three and half years in the Roxbury Division of Boston Municipal Court, the same busy courthouse where she was a student prosecutor during her final year of law school.

“We learned all the fundamentals in clinical,” Araujo says. “It definitely was daunting—you’re a student attorney, but the judge is treating you like the Commonwealth, because you represent the Commonwealth!”

Like Cavanaugh, Araujo’s work is informed by her life experience. As a child, she lived in a tough part of Boston’s Dorchester neighborhood. Her mother was once followed home from work by a man who tried to force his way into their apartment building, while her father, a taxi driver, worried nightly about being mugged by a passenger. Seeking a safer environment, her family eventually moved to Everett, but today Araujo’s inner-city childhood helps her connect with the crime victims whose interests she represents in court. That proved especially important as she began to specialize in domestic violence and cases involving children—cases that have taken on a new dimension since she had a son a year ago.

“I hope one day he sees the work that I do and appreciates it,” Araujo says. “I want him to learn to treat people fairly, and to realize that sometimes people make mistakes.”

Christina Miller, Suffolk County’s chief of district courts and community prosecutions—and an adjunct professor at Suffolk Law, in charge of placing students from the Prosecutors Program in courts—has watched Araujo’s career from the beginning.

“What makes Joanne unique is her care in interactions with the community, with victims and their families,” she says. “Child protection cases are very intensive, and she’s exceptional at building trust. I think that all started with the Suffolk program.”

As much as she empathizes with victims, Araujo credits the program with helping her to see cases from both sides. “For me, coming in, it was very black and white,” she says. “I thought people who do bad things should go to jail. But in clinic, I realized a lot of our defendants are prior victims, and a lot of our victims will become defendants. There’s a bigger picture, and it’s gray.”

Her own version of justice

Back in West Roxbury, Cavanaugh was thinking hard about those shades of gray as she considered the case of the 36-year-old heroin addict. After conferring with O’Rourke, she decided to offer the defendant a deal: If he participated in Narcotics Anonymous and came back in a month with a clean drug test, she would drop the charges. Would that serve as sufficient motivation for the addict to seek help?

“That’s the kind of system I want to be a part of!” Cavanaugh says.

But, as happens so often in the criminal justice system, things failed to go as planned. The man’s next court date came and went, and he couldn’t meet the requirements Cavanaugh laid out.

“That’s the catch, right?” she says. “Sometimes you do everything you can to help someone, and they can’t help themselves. It’s a struggle that prosecutors face every day.”

The next step would be to seek a guilty plea, and Cavanaugh still hoped the resolution of the case, whether it involved jail time, probation, or a court-mandated treatment plan, might help the man find the support he needed to kick his habit. Meanwhile, she would turn her attention to the other 14 active cases on her docket. Each thin file folder represents a story of misfortune, malice, addiction, greed—or a simple mistake. Some might be straightforward, some convoluted, some sad, but each offers the student prosecutor an opportunity to sort through shades of gray, and to find her own version of justice.

*This story has been modified from its original version to reflect new information.
Issue Contents Back to Top 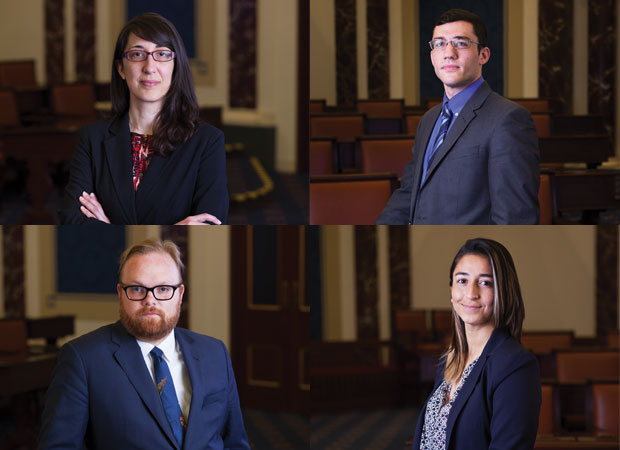