To cure his wanderlust, Jeffrey Gangi ’14 joined the Marines. To conquer new worlds, his next smart move is a legal education.

As a boy in Woburn, Massachusetts, Jeffrey Gangi’s wanderlust was fueled by the classic adventure books he found in his grandfather’s library. He craved a life far beyond suburban Boston and, determined to see the world, he joined the Marines right out of high school.

“I thought it sounded like fun, and it is a lot of fun once you get past the unsavory Full Metal Jacket image of what boot camp is,” says Gangi ’14, referring to the 1987 Stanley Kubrick film with its harrowing scenes of basic training. “It was nerve-wracking for the first few days, and I think I was homesick for the first 12 hours. Then I was like ‘OK, this is my new life.’”

That life would take Gangi to such locations as the Horn of Africa, Iraq, and Afghanistan. Rising to the rank of staff sergeant, he worked primarily in counterintelligence. Yet after more than 12 years in the military, Gangi found himself “ready for a new adventure,” one that would eventually bring him back home to Massachusetts and a place he never expected to be: college and, now, Suffolk Law School.

“I never considered going to college. That was never on my radar,” says Gangi, 37. “But there were things I wanted to do that, even after 12½ years in the Marines, required a college degree.”

For someone who once overlooked higher education, Gangi is a natural in the classroom, says Suffolk Law professor Russell Murphy JD ’73, who taught the former Marine in his first-year criminal law class. “What stood out about Jeff immediately was his willingness to participate in class discussions and answer my questions,” he says. “The second thing that stood out was his clear understanding of the material and that he had spent a lot of time with the assigned material.”

The oldest of three children, Gangi admits that he didn’t like school as a child. His parents—his father managed the family’s bowling alley and function hall, while his mother worked as a bank teller and for his grandfather’s locker company—didn’t prod him toward college. He was, however, well-read thanks to his grandfather, who also had a collection of atlases that gripped his grandson’s attention. While both of Gangi’s grandfathers served in the military, family history was not the biggest influence in his decision to sign up. “I just wanted to get away from here,” he says. “I wanted to get out and see stuff.”

After boot camp at Parris Island, South Carolina, Gangi was stationed in Oklahoma, Hawaii, and Japan. Following stints in artillery and as an administrative clerk, Gangi moved into counterintelligence, a field that, he says, “opened up a lot of doors in every facet of my life.” In Africa and the Middle East, Gangi served as part of a threat vulnerability assessment team for government locations. When he decided to leave the Marines, his background in counterintelligence helped him land jobs as a private contractor, which included a return to Afghanistan. He enjoyed the work but knew a college degree would offer still more opportunities—though some of his co-workers didn’t share his long view.

“There’s a thought process [among military veterans] that ‘We know how to do this, we have this much experience, and we have our [security] clearance. Companies will hire us, they don’t need us to have a degree.’ But they don’t think beyond that—what if this dries up?” says Gangi, who earned his bachelor’s degree in political science and legal studies from the University of Massachusetts at Lowell. “My idea was this has a shelf life. I thought if I have a degree at least I can get into some of these niche areas, and they will think I’m capable enough to learn. If you don’t have a degree, they don’t know how good you are at learning or if you have the ability to learn like they did. You’re not a part of the club, and it is a club.”

For college, Gangi returned to Massachusetts to be close to his family. He’d learned about Suffolk after meeting several graduates in the Washington, D.C., metro area where he had lived. “I was thinking about law school before I even started college,” says Gangi, who now lives in Everett, Massachusetts. “I wanted to go to law school because I thought it would be a good career change.”

Gangi also found time for his fellow students as president of Suffolk Law Armed Services Association, a position he held until this fall. “We put on the [Judge Advocate General] panel, an info session made up of the five services for students interested in becoming JAG officers. Our goal is to inform students and current military folks on what the functions of the JAG [are], and we also want military people to have a place to go for support from other members. But it’s not a veteran’s association; everyone is invited to come,” he says.

With his May graduation approaching, Gangi is weighing his professional options, including working for the federal government. Not surprisingly, he would welcome an opportunity to work outside of the United States. “I enjoy being out of the country—not because I don’t like it here, but because it’s different,” Gangi says. “I like to meet new people and experience other cultures. As interesting as Boston is, there’s a lot of other stuff out there. 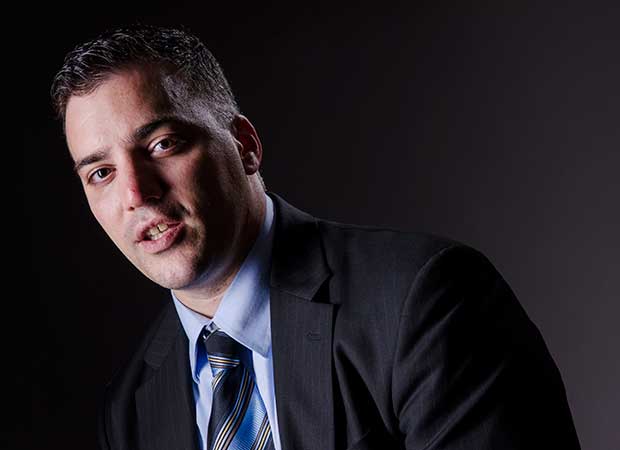 Last Book Read:
The Looming Tower: Al-Qaeda and the Road to 9/11 by Lawrence Wright.

Last CD/MP3 Purchased:
I downloaded a documentary about the Foo Fighters, Back and Forth.

Favorite “Only in Boston”Experience:
The ricotta cannoli at Modern Pastry in the North End. And I can’t even have them any more because I’m on a gluten-free diet.

Words to Live By:
I don’t know if I live by them, but it’s a cool phrase: “Admit nothing. Deny everything. Make counter-accusations.”

Role Model:
Joe Sallese, my grandfather, my mom’s father. He’s the one who pushed me to learn different stuff and read books. When I was eight, he handed me The Jungle Book and said “You should read this.” That book was gigantic!

Renée Graham is a staff writer for Suffolk Alumni Magazine. She has previously written for The Boston Globe, The Miami Herald, and Essence magazine.