A New Generation Reimagines the Practice of Law

Automation by robotic tools is making certain repetitive jobs done by humans obsolete, says Professor Gabriel Teninbaum. “But there’s definitely a job for the people who are programming, building, or fixing the robots,” he says.

“That’s not a perfect metaphor for the legal field,” he adds, “but the legal market is increasingly driven by technology and process improvement. Recent graduates have a leg up when they’re searching for jobs if they’re comfortable with the technologies that are—and will be—streamlining work in firms and government offices.”

A few years ago, then-professor Andrew Perlman, now the Law School’s dean, set out to build a suite of courses designed to prepare students for law­yering in the mobile age. The program has already made a national imprint, winning a spot among the 10 best in the nation in one recent ranking.

WHAT SHE DOESN’T SAY: “THAT’S NOT MY AREA” 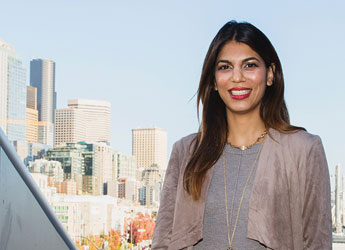 Recently, she’s been helping implement a tool developed in-house for clients who asked for an easier way to track their legal spend. “How much money has a client spent and on what?” she says. “I work with the firm’s IT department to make that information easy to digest, easy to visualize and in real time.”

Her other clients want to know how legal processes can be made more efficient so they can not only save money but also send the firm more work without increasing costs. To answer their questions, she says, you need to understand tech tools that collect and provide data, analyze that data and then pinpoint inefficiencies. “Clients want an at­torney with enough tech and process understanding to conceptualize a solution—not to just shake their heads and say, ‘That’s not my area.’”

Mehera says she got a part-time job as a contractor at Davis Wright Tremaine—which grew into a full-time position—because of her background in Legal Lean Six Sigma,  a legal project management and process improvement credential she earned through an LTIC core class taught by Adjunct Professor Catherine Alman MacDonagh, a leader in that field. Her two internships helped as well.

During her 3L year, as an intern at the Trial Court, Mehera worked on automating guardianship and name change forms. “I’d see lines of confused people filling out forms longhand and not enough people there to assist,” she says. She also worked with the Committee for Public Counsel Services, creating and improving legal apps to make simple day-to-day tasks for attorneys easier.

The position at Davis Wright Tremaine grew out of a phone call that Dean Perlman received from the Seattle firm, which was searching far and wide for interns with process know-how. Perlman immediately thought of Mehera. 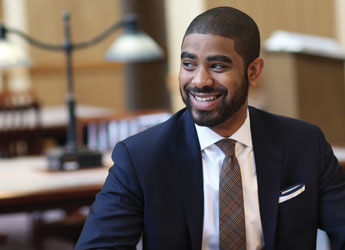 Another LTIC graduate, Gerald Glover III JD ’15, says contract management innovators Exari Systems hired him as a business an­alyst precisely because he could bridge the gap between IT and law. The Boston company builds tools that can quickly generate visually digestible data on contract deadlines, costs, and liability, including an algorithm that analyzes and assigns a risk score to avoid breaches.

Recent graduate Mike Cappucci JD, MBA ’15 combined his passion for business startup culture and his legal tech background in Adjunct Professor Marc Lauritsen’s “Lawyering in the Age of Smart Machines” course. During the class, he built an app that helps entrepre­neurs request venture capital funding and answers basic legal questions on topics like incorporation. Cappucci went on to co-found his own consulting company, Foundation Lab, creating tools for law firms to improve efficiency.

FILL THE GAP. BUT HOW?

When it comes to the role of technology in improving legal service, William Hubbard, immediate past pres­ident of the American Bar Association, notes recent reports from the National Center for State Courts and the Conferences of Chief Justices. Those papers indicate that in three-quarters of civil cases, one of the parties is not represented by a lawyer. “What we have is a disconnect,” says Hubbard—a structural problem in the delivery of legal services.

“That problem cannot be solved, paraphrasing Einstein, using the same kind of thinking that created the problem,” he adds.

Hubbard says Suffolk Law and Perlman are leaders in searching for new ways to deliver legal services in ways that are cheaper and more streamlined—and that open the doors to moderate-income clients. As chair of the Governing Council of the ABA’s Center for Innovation, Perlman is at the center of that national effort.

“It’s not so important that students be experts in technology as it is for them to get a sense of the opportunities that technology provides,” Hubbard says. They should learn some basic skills in applications and new software, he says, with the understanding that the tools change daily. “But more important is that Suffolk is inculcating a sense that there’s a new way, a better way to address the needs of our country.”

Lisa Damon, partner at Seyfarth Shaw LLP and na­tional chair of its Labor & Employment department, says hiring managers at her firm pay special attention to new graduates with legal tech and project management skills. Seyfarth Shaw is an Am Law 100 firm that also has a consulting practice focusing on legal project management and process improvement.

“At some point in litigation, I want to look at the facts and develop a trial storyline or framework,” she says. “One of your Suffolk lawyers who has training in project management and process mapping or an innovative way to think is going to be much more valuable on the team than someone who has not had that training.”

In complex litigation, she says, she’s managing thousands of docu­ments and pieces of information. “If I have a lawyer who is facile with the technology, who could look at the platform we’ve built for the case and sug­gest a better way to use it, that’s value I’m going to get from no one else.”

When it comes to lawyers with tech and process savvy, she says, firms are on the verge of a talent shortage. “We can’t fill positions with lawyers who don’t have the proper skill base. We want people who can solve our clients’ problems.”

Eric Parker JD ’86, co-founder and managing partner of Parker Scheer LLP, agrees with Damon that the graduates’ skill set will be useful on the job market. “Suffolk is producing a student who can do something that most other students can’t,” he says.

Parker argues that specialization—in legal technology or patents, for example—has become increasingly important to hiring managers: “They’d rather not hire a plain vanilla JD. They want someone with a special skill set. Someone who can start providing value the day they arrive.”

The streamlining of legal practice, across various specialties, is al­ready happening, he says, “and your tech students are in a position to help oversee that. Patent law has already undergone some streamlining, but a field like real estate conveyancing [transfer of home ownership] is still medieval.”

Perlman sees the program as fitting squarely into the Law School’s tradition of focusing on skills training. “We always have focused on teaching our students the skills necessary to be outstanding lawyers,” he says. “But we need to supplement those traditional skills with a skill set that’s critical in the 21st century.”

And an understanding of legal technology, project management, and process improvement can be helpful across legal fields. “Do stu­dents want to work at a Fortune 100 company, a large law firm or a small firm? The government? Do they want a career in public service?” he asks. “No matter what path they choose, they will be better law­yers if they understand both traditional skills as well as the skills that 21st-century lawyers need to be successful.”

Whichever direction students take, the field is in the midst of an earthquake, Perlman argues: “We can’t continue to train students like the tech revolution everywhere around us never happened.”

Twenty years from now, most law schools will be folding technol­ogy into their curriculum, he contends. Sophisticated corporate clients are demanding technological competence and asking firms to experi­ment with alternatives to the billable hour. When a firm offers a flat fee for service, there’s suddenly an incentive to be more efficient—to work faster and spend less. “That’s the new way, and our students are already helping to drive that change.” 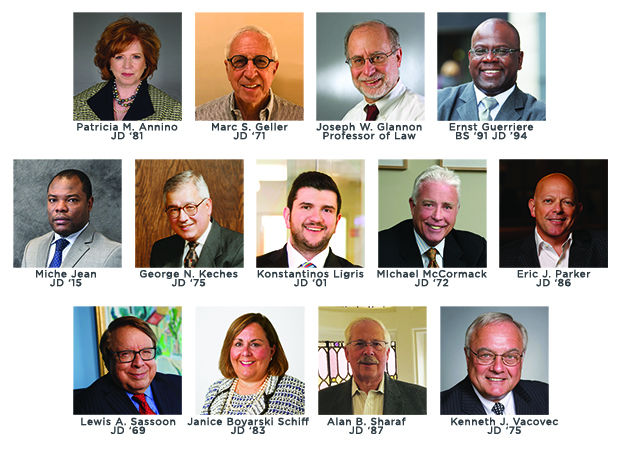 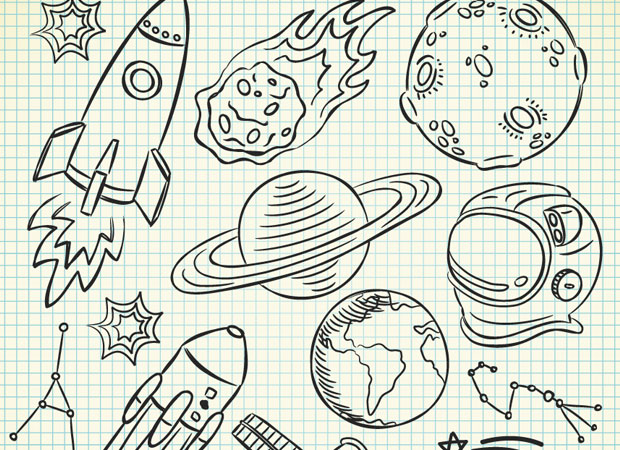 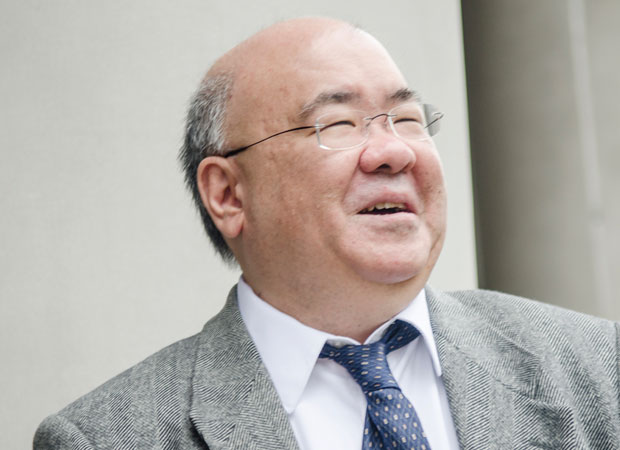